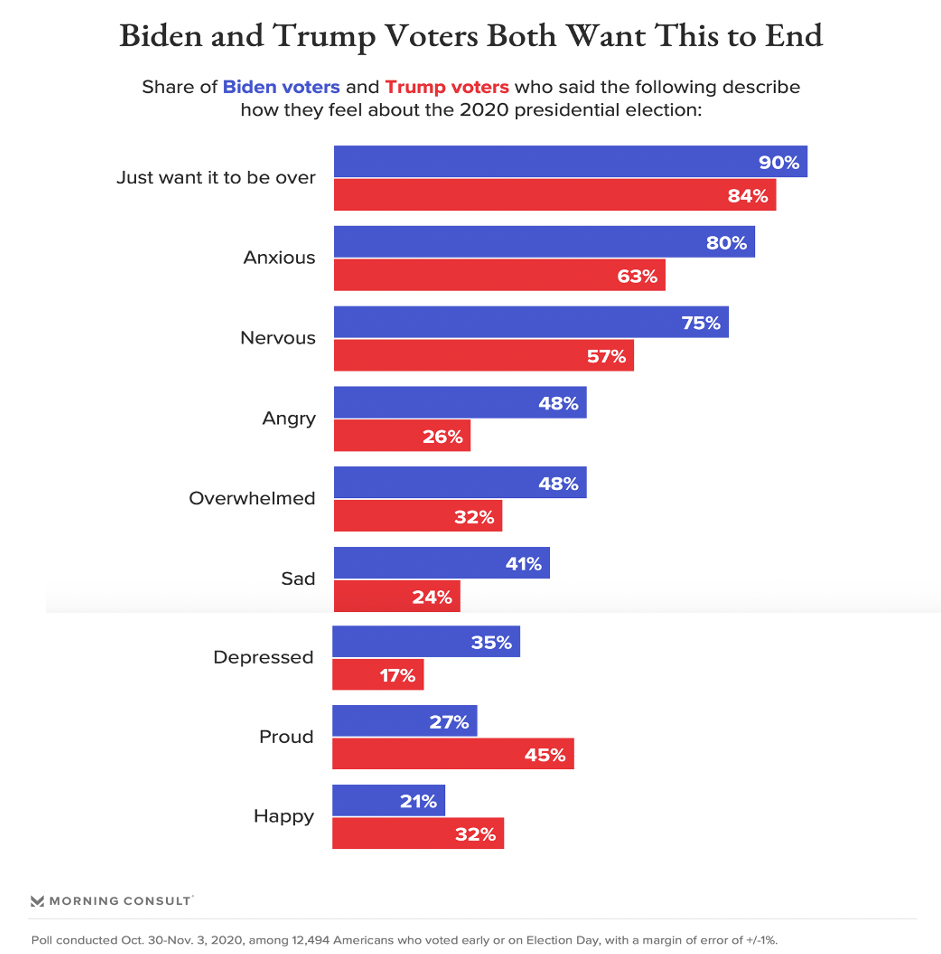 Glad it’s over?
So are most Americans.

COVID fatigue. Election fatigue. This chart sums it up for me.

As the dust settles and the transition begins, here are my top five takeaways from the 2020 Election:

In my opinion, two numbers drove the results of this election:

Turnout for this election was historic.

According to Bloomberg Government, these votes include mail and in-person votes before election day.

Cases & hospitalizations were at an all-time high in 44 states.

According to Morning Consult Exit Polling describing the top issues for 2020 voters, controlling the spread of COVID was the number one issue motivating voters to cast their ballots.

93% of Biden voters and 59% of Trump voter said COVID was their top issue in deciding to who to vote for.

Most polls, especially nationally polls, predicted a Democratic wave. Democrats would win the Presidency, the Senate, and the House. A total sweep.

President Elect Biden won 306 electoral votes. Not a mandate. Not a landslide either.

Currently, the Senate is 53-47 in favor of Republican control. The thought was Democrats would win at least 5-8 races to flip control to Democrats.

If you look at each election in the chart above, Democrats raised a lot more money than their Republican opponents.

Of these ten races, Democrats only won Arizona and Colorado. Gary Peters is a current Senator, so his race was not a new win for Democrats.

Democrats won two seats. Not the 5-8 seats expected despite these huge fundraising numbers.

Democrats can still win the Senate majority due to the two Senate run-offs in Georgia. Democrats need to win both run-offs to send Senate control to a 50-50 tie in the Senate.

A fascinating stat, according to FiveThirtyEight,

“The Senate’s structure gives it a Republican bias — the median seat is 6-7 percentage points more GOP-leaning than the nation, so Democrats need to really overperform nationally to win the chamber. And while the party did well in 2020, it looks it didn’t quite clear that bar.”

Similarly, in the House, Democrats were expected to increase their majority by double digits.

Republicans were supposed to get clobbered in the House. Yet, no Republican incumbent has lost thus far.

Instead, House Republicans had a great election. Republicans gained seats even though House Democrats will have a razor thin margin in their control of the House.

Republicans will have 26 Female Members next year, the most in history.

Currently, 220 Democrats will be in the House compared to 204 Republicans.

Two weeks since election day, and this many House races are still outstanding.

The Democratic margin could narrow significantly.

That is not a blue wave.

16 days after election day, we are still counting votes.

The third point demonstrates the resiliency of the Trump strategy.

President Trump and his campaign team knew their 2016 strategy would work in 2020.

The “secret” Trump voter – who would not admit publicly that they were voting for Donald Trump – made the difference in 2016.

These same “secret” Trump voters made the difference in 2020.

The reason the polls were wrong? “Secret” Trump voters. They support President Trump but will not admit it. It is that simple.

National and some state polls underestimated Trump by 3-5 points. Some of these voters account for the undercounting in the polls.

Likewise, the same principle applies for the “shy” Biden voter.

The numbers speak for themselves. According to the Washington Post:

Underlying these numbers are message and audience segmentation.

The Hispanic/Latino vote is the prime example. The messages about Democrats and socialism resonated with Cuban American and Puerto Rican American voters in South Florida. President Trump won both audiences.

Contrast that with Hispanic/Latino votes in Nevada, Arizona, and Texas, and the numbers tell a different story.

Georgia on my mind…a great song by Ray Charles.

Georgia was on the mind of a lot of voters who turned the state from red to purple.

Biden’s victory in Georgia is the first for a Democratic presidential candidate since President Bill Clinton in 1992.

President Trump won Georgia by more than 5 points in 2016.

Biden will win Georgia by 12,284 votes, according to the Georgia secretary of state’s office after today’s recount.

Georgia is now a swing state due to its changing demographics.

The same can be said for Arizona.

The last time a Democratic presidential candidate won Arizona was 1996, when Bill Clinton was reelected.

This year, the early vote exceeded the state’s total votes of 2.7 million cast in 2016.