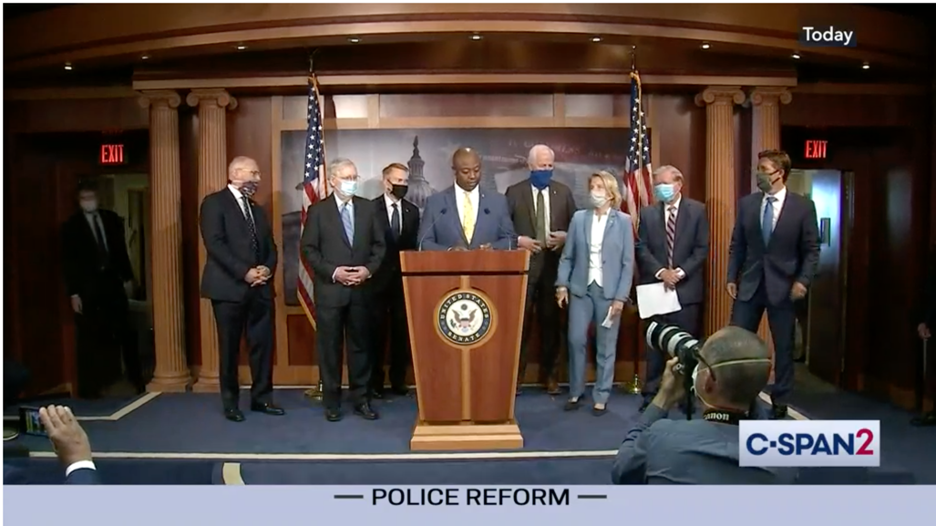 Protests around the country continue.

Cities and States are immediately responding with police reforms in their communities.

Congressional Republicans have been working on their response.

House Minority Republican Leader Kevin McCarthy said there are some compromises that can be reached on policing reforms.

Senate Republicans have looked to Senator Tim Scott (R-SC), the only African American Republican Senator, to take the lead in drafting their response to the Democrats’ bill.

Senators in the Police Reform Working Group, listed below, made remarks about the murder of George Floyd and the national events that have occurred over the past few weeks:

During this morning’s press conference, Leader McConnell said this bill will be on the Senate floor as soon as next week, once the Senate clears the Great Outdoors Act and two pending judicial nominations.

“Well, thank you, Tim. Even before George Floyd and Breonna Taylor, Senator Scott has made it possible for those of us in the Senate Republican Conference who are not African-American to understand that this problem still exists. We learned about his being stopped on numerous occasions well before the events of this year, but the witnessing of the murder of George Floyd and the experience in my hometown of Breonna Taylor brings to the forefront this issue in front of the Senate Republicans. My role as the leader is to decide what we’re going to do. Floor time is the coin of the realm in the Senate because it does take a while to do almost anything. So what I’m announcing today is after we do two Circuit Judges who are queued up early this week or next week we’ll return to the Scott bill. I’m going to file cloture on the motion to proceed and if the democratic friends if they want to make a law and not just make a point, I hope they’ll join us in getting on the bill and trying to move forward in the way the Senate does move forward when it’s trying to actually get an outcome, rather just sparring back and forth which you all have seen on frequent occasions by both sides. Also, I want to thank the whole team behind us. Everybody has contributed significantly to this product, but without Tim’s leadership it would not have been possible and without his leadership, I wouldn’t be putting this on the floor. But I want you to know that we’re serious about making a law here. This is not about trying to create partisan differences. This is about coming together and getting an outcome. We showed we could do that on the CARES Act. We have shown it on the Great American Outdoors Act, and we need to show it on the Scott bill.”

Leader McConnell’s remarks on the Senate Floor about The JUSTICE Act.

Democrats criticized The JUSTICE Act as insufficient to meet this moment and inadequate to actually fix the problems.

Now that Leader McConnell has set the timeline for floor consideration, the question is whether the House and Senate will reach a compromise on their respective versions or whether each will insist their bill is the right response creating a legislative stalemate.